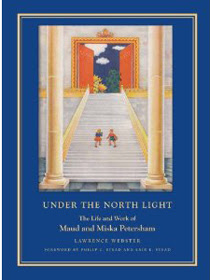 Author Lawrence Webster discusses her book: Under the North Light: The Life and Work of Maud and Miska Petersham, published by WoodstockArts, on the influential Woodstock-based husband-wife team of children's book illustrators.

“Maud, a 1912 Vassar graduate, had deep Yankee roots; Miska immigrated from Hungary in 1912 after rigorous study at the Royal National School for Applied Arts in Budapest. They met while working at a commercial design studio in New York City and married in 1917. They moved to Woodstock, New York, in 1920.

“Pioneers in a golden age of children's book publishing in America, the Petershams were among a handful of people who set the direction for illustrated children's books as we know them today. They worked closely with such legendary editors as Louise Seaman Bechtel and May Massee, and with such inventive printers as Charles Stringer and William Glaser, greatly advancing the art of the illustrated children's book. Under their studio's north light they produced more than a hundred books, as illustrators or author/illustrators, during a career that spanned five decades."

The interview with Lawrence Webster will be aired again on November 7, as our transmitter was still out on October 31 and we were only able to broadcast over our internet link.