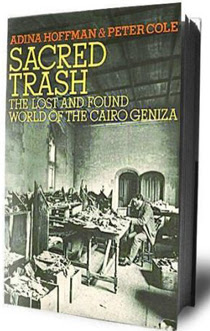 Adina Hoffman and Peter Cole talk about their book Sacred Trash: The Lost and Found World of the Cairo Geniza, published in 2011 by Schocken.

Adina Hoffman is the author of House of Windows: Portraits from a Jerusalem Neighborhood and My Happiness Bears No Relation to Happiness: A Poet’s Life in the Palestinian Century, which was named one of the best twenty books of 2009 by the Barnes & Noble Review and one of the top ten biographies of the year by Booklist.

Peter Cole’s most recent book of poetry is Things on Which I’ve Stumbled—whose title poem revolves around the Cairo Geniza. Cole’s translations from Hebrew and Arabic include War & Love, Love & War: New and Selected Poems by Aharon Shabtai; So What: New & Selected Poems by Taha Muhammad Ali; and The Dream of the Poem: Hebrew Poetry from Muslim and Christian Spain, 950-1492, which received the National Jewish Book Award in Poetry and the American Association of Publishers’ 2008 Hawkins Award for the university press book of the year.