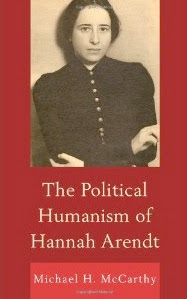 Michael H. McCarthy, Professor Emeritus of Philosophy at Vassar College, discusses one of the Twentieth Century's most important political philosophers, Hannah Arendt, and his book: The Political Humanism of Hannah Arendt, published in 2012 by Lexington Books.

“In this penetrating analysis, McCarthy reveals how anti-political biases within the Western philosophical tradition spawned 'anthropologies' that Arendt regarded as profoundly at odds with human dignity, plurality, and freedom. Rejecting both the reductionism that conflates people with beasts and the romanticism that conflates them with gods, Arendt emerges as a civic republican whose highest political virtue is devotion to a common world that, by uniting and separating us, allows us to actualize the full range of human possibilities."   -- Sandra K. Hinchman.