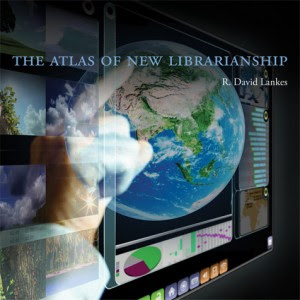 R. David Lankes, Syracuse University Professor, Dean's Scholar, and Director of the Information Institute of Syracuse, will talk about his vision for a new conception of librarians as
"radical agents of positive change" in their role as facilitators of community learning and knowledge-building, and his books Expect More: Demanding Better Libraries for Today's Complex World (2012), and The Atlas of New Librarianship (MIT, 2011), winner of the ABC-CLIO Award for the Best Book in Library Literature.

"The Atlas is not a book; it is a manifesto, a set of principles and convictions aimed at shaking new life and belief into a field that too often fears for its own future. Read it and be prepared to act." -- Andrew Dillon, University of Texas at Austin.

See the following libguide for an organize listing of Lankes' presentations: http://lawguides.creighton.edu/lankes