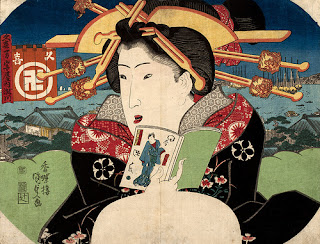 Karen Hwang, Assistant Professor of Art at Vassar College, and Patricia Phagan, Philip and Lynn Straus Curator of Prints and Drawings at the Frances Lehman Loeb Art Center at Vassar, will discuss the traveling exhibition currently on view at the Center through December 15, 2013  entitled "Genji's World in Japanese Woodblock Prints."

"The Tale of Genji, written in the eleventh century by the Japanese court lady Murasaki Shikibu, has greatly influenced Japanese culture, from novels and kabuki performances to today’s manga and animé. That influence can be clearly seen in the works in this exhibition, which features a rich array of fifty-seven woodblock prints by many of Japan’s leading eighteenth- and nineteenth-century artists."