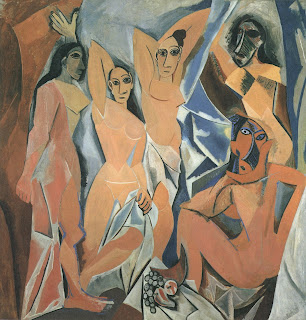 “It is a condition of masterworks that they attract, even demand, interpretation and reinterpretation. Picasso's Les Demoiselles d’Avignon is a case in point. In 1946, Alfred Barr called it ‘a battlefield of trial and experiment’ marking ‘the beginning of a new period in the history of modern art.’ Twenty-six years later, Leo Steinberg argued that its psychic and pictorial ‘violence’ resides in its power of displacement, in ‘the startled consciousness of a viewer who sees himself seen.’ Others have examined its ‘primitivism’ and l’art negre as central to its power and originality. Now, Suzanne Blier, through a close textual and visual analysis of an astonishing range of references, argues that Picasso’s creativity ‘involved both drawing on and subverting the past’ while reimagining the present and creating the future anew. Blier's study rewards close reading, just as the painting rewards close and sustained looking.” — James Cuno, President and CEO, The J. Paul Getty Trust

“Combining the specialized skills of an art historian with the zeal of a detective, Suzanne Preston Blier offers a bold and transformative re-reading of the Demoiselles. She startlingly shifts the interpretive foundations of Picasso and the Demoiselles: she shows us a Picasso not as bombastic egotist but as capacious globalist; not as masculine master fixated on female sexuality and its attendant anxieties, but as explorer of the power and presence of women and their generative capacities. This provocative and pathbreaking book scrambles the logic of modernism, primitivism, and feminism in the discipline of art history.” — Debora Silverman, author of Van Gogh and Gauguin: The Search for Sacred Art

Dora Apel, W. Hawkins Ferry Professor Emerita of Modern and Contemporary Art History at Wayne State University, returns to the program to talk about her book Beautiful, Terrible Ruins: Detroit and the Anxiety of Decline, published by Rutgers University Press in 2015.

C. Stephen Jaeger,  Edward William and Jane Marr Gutgsell Professor Emeritus of Germanic and Comparative Literatures at the University of Illinois Urbana/Champaign, returns to The Library Cafe to talk about his most recent monograph: The Sense of the Sublime in the Middle Ages, just published via Academia.edu.